This book does what it says on the cover!

This is a truly encouraging book, delightfully written, in the form of a one-week rail and road trip around Scotland, seeing what’s new and working well in raising community resilience. It has just the right amount of practical detail and atmospheric colour.

I also appreciated the way this book has a light touch on editorial, and mostly lets the people and their projects do the talking. The overall picture that emerges has been an important part of my conclusions about how the community resilience sector works in the UK currently. Here are some of my key conclusions, which this book supports:

Here are a few of the authors’ perspectives: 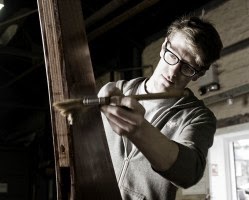 “For communities to take more responsibility for their own destinies requires an unbelievable amount of hard work…Not just …the small numbers of people trusts can afford to employ.  Especially from the countless volunteers…”.
“it often feels as if each community setting foot on this new road has to redraw, from scratch, the map that will shape its journey.”

“to prosper in the long-term, we believe all trusts may have to turn themselves into social enterprises of genuine scale”.

Here are some of the specific projects featured in the book:

Dunbar: Artisan bakery, community owned and funded.  The umbrella organisation is a Community Development Trust, which grew out of a local consultation.

Twechar: A rundown former mining village took over the leisure centre from the local authority when it was due for closure, and has made it a real community hub.

Burntisland: Mike Small and the Fife Diet.  It started with communal meals of local produce in the village hall.  Funded by the Climate Challenge Fund.

Fintry, nr Stirling: Development Trust raised funds (from 50% of all local adults) to invest in part of a local commercial wind farm: after 2022 when capital repaid should generate £0.5m annual income.  Also car club and many other community facilities.

Neilston, south of Glasgow: Development Trust led by a dynamicc local woman: created a Town Charter with 44 project aims by 2030.  Funding a key issue – the 44 would cost £15m or more.  Raised money to buy a share of a local windfarm, will bring in £0.5m per annum from 2018.

Eigg: The islanders bought the island.  Have set up their own energy supply company, 90% renewable sources.  It also has a forest business, and a 24-bed luxury hostel and outdoor centre.