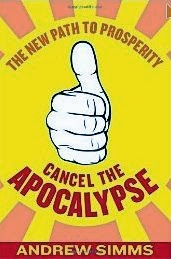 In the Smart Thinking section of a Waterstones, this is one of numerous large, mostly worrying books about the future. I was persuaded to buy this one by its optimistic title, and my good opinion of the author. Andrew Simms is a Fellow of the new economics foundation who has contributed to some good innovative thinking over the past twenty years.

This book has a lot of useful information, insights and piercing statistics about why things are as bad as they are, on many fronts: world economics, banking, food, and lots more. Simms is familiar with a lot of good research and resources, which are well referenced here. But he also rambles and digresses: the 250-page version of this book would be more readable and useful than the actual 474 pages. Some of the many useful insights in the book include:

I found it annoying that over 90% of this book is devoted to a range of specific issues, in which the problems are described at length, along with a variety of potential solutions, but mostly potential ones: to be more specific, he quotes details of positive initiatives which are working well somewhere, or bright ideas, but gives very little clue on how all this could be propagated in the mainstream. I became increasingly curious as to what the pivotal final chapter would contain.

Sadly, as with many of these books, Simms has little that’s new or convincing to say about how the large-scale economic, political and social structures of the world or the UK could be transformed into the more localised, collaborative, human approaches which he advocates. His suggestion that we all try to re-invent our sense of place and of time is a good start, but inspiring more than a small minority to do even this seems hard to imagine…