Is myth both the problem and the solution?

Berry has an unusual, eloquent, and valuable view of how we humans got into the current crisis, and how to move out of it.  This view is powerfully presented in the ‘Dream of the Earth’, one of his many books.

Thomas Berry described himself as a cosmologist and Earth Scholar – he was also a Catholic priest, who was born and lived in the USA, and died in 2009 at the age of 94.  The idea of the universe as our context, and the universe as a story that we need to read and contribute to, were crucial to his work.Berry has a clear and stark view of the current situation: “we could describe our industrial society as the addictive, paralysing manifestation of a deep cultural pathology…”  He comments that not only does materialist society regard the planet as something to be used, but also our cultural and even spiritual values see humans as separate from the Earth and other life on it. 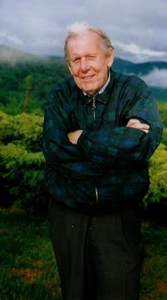 Berry believes that an important reason for this situation is a rise of ‘redemption spirituality’, which largely regards this world as a vale of pain to escape from.  By focussing too much on the link between human and divine, “We have lost contact with the revelation of the divine in nature.”

Berry believes that myth is at the root of both the problem and the solution: “the main difficulty in replacing the industrial order is not the physical nature of the situation, but its mythic entrancement… the myth is primary… so far the energy evoked by the ecological vision has not been sufficient to offset the energies evoked by the industrial vision – even when its desolation  becomes so obvious…”

This new myth “must emerge from our new story of the universe.  This… can be understood as soon as we recognise that the evolutionary process is from the beginning a spiritual as we as a physical process.”  He comments that, “The human community must assume adult responsibilities in our role on Earth.  The recent centuries have been like an adolescent period in humans’ handling of this power.” To do this, “we must invent, or re-invent, a sustainable human culture by a descent into our pre-rational, our instinctive, resources.”

So it’s crucial to the new story that we humans see ourselves as part of the continuing story of creation, “as that being in whom the universe reflects on and celebrates itself.”   This is the essence of creation spirituality, which is well explored in the book Genesis Meditations by Neil Douglas Klotz.

Deeper contact with nature is crucial, both to give us the insights to move forward, and the passion to act on them and preserve this planet where, in truth, we are “a species among species”.  As Berry says, “The mythic dimension of the ecological age is… a deep insight into… the entire earth process.  This includes its seasonal rhythms as well as its historical transformations, its revelatory communication as well as its pragmatic functioning.”

Berry has a sense of optimism about the future, which may seem surprising.  It arises from his sense of the intelligence of Gaia, and a belief that if Gaia allowed humans to create this mess, it must be a huge growth opportunity for both humans and the planet: “the basic mood of the future might well be one of confidence in the continuing revelation that takes place in and through the earth.  If the dynamics of the universe… guided us safely through the turbulent centuries, there is reason to believe that this same guiding process is precisely what has awakened in us our present understanding of ourselves and our relation to this stupendous process.”

For more on Thomas Berry and his work see: www.thomasberry.org