Comparing the community woodland sector North and South of the border is sad and striking – from down here.  Scotland has over 250 community woodlands, with an umbrella organisation, and national government support.

In England, there are a diverse scattering of projects, but some of the big ones (such as Avon) have fizzled out as national government support was cut.  And although the Woodland Trust encourages community groups in some of its woods, the community woodland network it helped create is now defunct.

On my recent Scottish trip, I visited two inspiring projects.  Rosewell is a depressed ex-mining town in the Central Belt where the wood has played a focal role in regenerating the community.  And they don’t even own their wood!  It belongs to the Crown Estate, who regard it as uneconomic, and are happy for local people to look after it.

Rosewell have worked closely with Earth for Life, a small social enterprise run by my friend Alasdair Taylor.  Their astute plan was to start with the primary school kids, for whom they created a Junior Ranger programme.  This meant that the local teens, who vandalised other initiatives, looked after this one.

Earth for Life and Rosewell Community Trust then ran woodland open days, where the kids shared their learning with the adults.  They have also run conservation programmes for mental health and other special needs groups.  I met one of these at the wood, and their joy was delightful.

I also visited Wooplaw in the Borders, one of the first community woodlands in Scotland.  It was kick-started by private fundraising, helped by grants, and a new wood was planted in open fields.  Fifteen years later, it already has the character of a settled, peaceful wood.  There are frequent conservation groups, and lots of happy dog walkers! 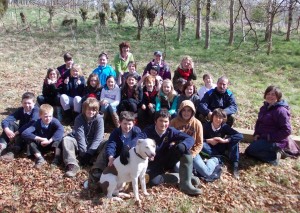