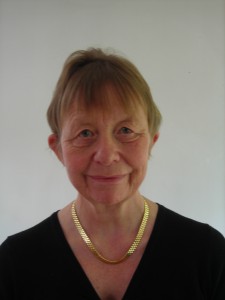 Rosemary Randall is a psychotherapist and group facilitator who has been involved in the environmental movement for many years.  She writes and lectures widely on the psychological aspects of climate change.

Andy Brown is an engineer with a background in the social sciences.  He works in research for the built environment and has been a lifelong supporter of environmental causes.

“In Time for Tomorrow”* is the new edition of the Carbon Conversations Handbook, by Rosemary Randall and Andy Brown.  The handbook is part of a package of materials that support Carbon Conversations groups – facilitated groups of 6-8 people who meet 6 times over a few months to explore and reduce the impact which their personal lives have on the climate.

The whole package represents a remarkable achievement, in that it provides both an outstanding synthesis of up-to-date, practical information on how to reduce one’s own carbon footprint; and a carefully designed series of structured conversations – all informed by Rosemary Randall’s training and experience as a psychotherapist.

A recent survey (RSA, 2013) found that most people are concerned about climate change, but they do not match this with much sense of connection to the issue – the sense of urgency or the actions that you would expect given the scale of the problem are missing.

This seems weird – particularly given the overwhelming consensus among climate scientists about the severity of the climate crisis.  But these responses are familiar to therapists working with people who are faced with distressing knowledge of any sort. People don’t usually deny the facts of a painful situation.  Instead, they protect themselves by denying the meaning, the importance, or the permanence of those facts.

Therapists refer to this form of denial as “disavowal”: we acknowledge the facts as true, but behave as though they are not.  In this way, disavowal creates splits in the mind that allow us to carry on as usual.  We don’t actively deny the truth – we simply “park it” in a separate box in the mind, and behave as if it doesn’t matter.  Moreover, having made the split, we do not welcome someone coming along and pointing it out to us – it’s much more comfortable to carry as if everything is fine (even though we know it isn’t really).

This is why it is so hard to really engage people on climate change – and why Carbon Conversations is such an important development.  Crucially, the approach aims to create what Ro Randall calls a “safe space” for people to talk about climate change – and what to do about it.  By talking to others about the practicalities, discussing the pros and cons, etc, we can develop the resilience we need to take the decisions and actions that are needed. 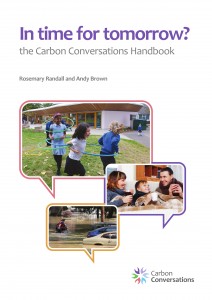 Carbon Conversations is first and foremost about reducing our own carbon emissions.  But in doing so, we are also more likely to recognise the need for wider action, above all by governments.

But no one should assume that any of this is going to be easy.  First, you have to overcome people’s understandable reticence about joining a Carbon Conversations group!  But more fundamentally, fossil fuels are both woven into our daily lives, and bolstered by the culture of uncare described by Sally Weintrobe; while the simple but stark arithmetic of climate change is that we need to reduce our individual carbon footprints from an average of 15 tonnes per year to 1 or 2 tonnes per year, as soon as we possibly can.  But “In Time for Tomorrow” and Carbon Conversations – above all because of their psychological insights, and the compassion which informs them – are a key step towards the low carbon future that is the only alternative to an unliveable planet.