When I saw that a conversation with James Lovelock was part of the recent  Bridport Literary Festival, I could hardly believe it.  Firstly, he’s internationally renowned, secondly he’s 91: surely not in our small market town??  Seeing him in person was invaluable, because he’s hard to categorise.

James describes himself as a 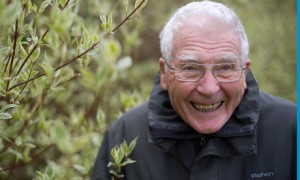 n inventor, not a scientist, and this is a key insight.  He has a freedom of approach and a mischievous, maverick quality, which would be harder within the technical and academic disciplines (and funding constraints) of professional scientists.  He spoke eloquently of the dangers of scientists getting too deep within one specialised discipline, and focussing on single issues, yet he showed the same limitations himself.

One reason why James was doing this session was to promote his new book, A Rough Ride to the Future, to be published in April 2015.  In this, he declares that the speed and threat of global warming has been overstated by many experts, including himself.  He says that the evidence of recent years shows that warming is happening more slowly than forecast, partly due to the huge ability of the oceans to absorb additional heat.

James’s provocative view is that we really shouldn’t bother about mitigating climate change and global warming but instead should focus our immense human inventiveness on adaptation.  During the discussion part of the session, it was clear that many of the audience (including me) don’t share his view about the urgency of mitigating climate change.  His response to some intelligent questions from the audience on this were strikingly simplistic and dismissive.  For example, he was asked if he was concerned about the rapid loss of animal, marine and plant species, about the acidification of the oceans, and the effect all of this might have on humans.  Essentially, his answer was ‘not really’.

Equally astonishing was his focus on the UK rather than global needs.  A questioner pointed out that many parts of the world could be more severely effected by continuing climate change, and less able to adapt.  His response that the UK should not worry about this, but should focus on the ability to meet its own food needs.  He doubts if Britain can achieve this, whereas there have been several well-analysed studies in recent years to show that this would be possible, given intelligent changes to diet and land use.

James’ work in articulating the concept of Gaia, creating widespread awareness of the earth as a wise, self-regulating organism, have been invaluable. In this session, he observed that the growing awareness and capabilities of humans is the medium for Gaia becoming conscious of itself which offers scope for further transformation.  He posed a really fascinating question which was left unanswered: what is the benefit to Gaia of humanity’s presence and capabilities?

As the session went on, I had a growing sense that James Lovelock at 91 has a remarkable combination of genius, massive blind spots, and a delight in stirring things up.  One of my companions at the session summed him up as the Jeremy Clarkson of the environmental sector, and there really is some truth to this.  But at 91, perhaps elders should be twisting our tails as he does, and forcing us to think things through for ourselves.