I am writing this at the start of September 2015: what a delicious set of upsets we’ve already had in the first few weeks of this Premiership season.  The bookies had Chelsea as favourites to win the league again, yet they have made one of the worst starts ever for defending league champions.  And as a West Ham supporter, seeing them win decisively at the Emirates and Anfield has been delicious. Since so many people share my love for the game, why not use it as a guide or metaphor for the inner life?

The image of the club is like your image in the world around you.  Whatever your present reality, the glories or otherwise of your past have created a mass of associations which are held by many others.  Like a club, you will have fans and opponents, and their beliefs about you will change only slowly.

The players at the club are like the aspects of your personality.  Some are wild, some are quiet.  Some break the rules often, others keep their nose clean.  Some appear on the pitch often, some stay mostly in the reserves.  Your players could be called sub-personalities: star centre-forward carrying so many expectations, the wiry winger, the chunky fullback, the goalie who pulls off miracle saves.  Or in worldly terms, the romantic, the geek, the angry hitman, the saintly sage and so on.

Often you may be only aware of one of your players at a time: the geek may lead in a work task, the romantic may lead on a hot date but substituted by the lonely moper if you are losing the match.  Although only one of your inner players has your attention, i.e. the ball, other aspects of you are on the pitch, in the team, and it can help you to draw them into the manoeuvres.

One of the things I love about soccer is the astonishing difference the manager can make.   This season, look at transformation of Crystal Palace under Alan Pardew.  Or more intriguingly, look at the poor record of Mark Hughes in recent posts, and the sustained benefit he has brought to Stoke.  What’s the analogy for your inner life?  As in football, your inner manager needs to bring a combination of intelligence and inspiration, technique and passion, to your inner team.

Your inner manager sets the flavour and atmosphere for your whole inner team, and his choice of tactics, substitutions, comments to the media, can all be highly influential.  Think about the huge range of personalities among current premiership managers, and see which one you resonate with, and if there’s another you’d prefer to have as a role model…

Just as different football teams respond to different managers and approaches, there’s no one prescription for your inner life.  But somehow, you need to connect with your sense of purpose and passion, so that your inner players go out with fire in their hearts, and can pull themselves back against impossible odds.  Remember Newcastle’s legendary recovery from 0 – 4 to 4 – 4 against Arsenal?

Looking at Barcelona’s continuing success, it’s so clear that it arises from brilliance in both method and motivation.  Your inner manager needs to know what training and techniques will help your players face the challenges of your life.  He needs to find the right team choices among your inner players, so that you bring a mix of skills to bear on every situation.

The coaching team are also vital in the morale and the skills of your players.  Your coaching inputs may come from friends, professionals like counsellors, resilience training, or weekend groups like those at Hazel Hill see www.hazelhill.org.uk for details).

My local paper in Bridport, West Dorset, once had a caption which nearly gave me heart failure.  It read Here’s to the Premier!, over a picture of four men with bubbly at the low-key ground of Bridport Football Club.  They are celebrating promotion to the Toolstation Western League Premier Division.  It’s a useful reminder that few of us as individuals will be in the limelight of a UK Premier League.  Most of us will be in the equivalent of the Toolstation Premier Division.  Local football clubs have just the same dramas and delights as their big brothers, so whatever league you may be in, find the passion and wisdom to manage your team well. 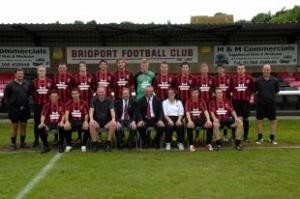 There’s more than one premier league