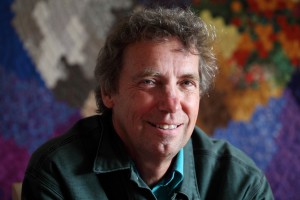 Alan Heeks is a writer, pioneer and group leader with a passion for creative insights through unlikely combinations and learning from nature.  Alan’s successful business career, followed by twenty years of creating nature-based learning centres, is an unlikely mix. He comments, “the innovative projects I’ve created have grown from intuition, helped by management skills, but also by my ignorance of the scale of the challenge.  It has made me learn fast, and take my own medicine.”

In 1990, Alan gifted a large chunk of capital from a business he founded, to create an educational charity and 130-acre organic farm, with programmes for adults and schoolchildren.  Magdalen Farm was where Alan learned about organic growth, and how such approaches can help people with their own happiness and resilience.  In 1992, another wild intuition led Alan to start an education centre at Hazel Hill, a beautiful 70-acre wood near Salisbury.  With a few colleagues, Alan then set up Wisdom Tree, which runs trainings in natural happiness and resilience at the wood for individuals, work organisations and communities.

Alan’s next big adventure came in 2004: founding the UK’s first low-impact, affordable cohousing community, The Threshold Centre and living there for five years.  Alan says, “living in a community taught me lots about myself, and about the value of groups.  Our community market garden gave me a lot of gardening experience, and a lot of good meals.”

Alan is a widely experienced workshop leader.  He has led many groups for business and non-profit work teams, and many personal development groups and retreats.  These groups have been a catalyst for his books.  The Natural Advantage: Renewing Yourself was Alan’s first book, published in 2000.  It shows how the principles of organic growth can improve resilience and performance in the workplace, drawing on Alan’s experience at Magdalen Farm.  His second book, in 2013, was Out of the Woods: a guide to life for men beyond 50.  This drew on learning from his long involvement with men’s groups.

Alan has been a keynote speaker at many events and conferences, including Natural Products Expo in California, UK Soil Association, and wellbeing events.  His work has been widely featured in press and radio, including as guest on the Johnny Walker Show, Radio 2.

Alan was born in 1948, married in 1971, divorced in 1998, re-married in 2012.  He has two daughters in their thirties. His inspirations include Alfred the Great, Pete Townsend, Mary Magdalen, Groucho Marx, Sufi poets, and his daughters. He has two first class degrees, an MA in English Literature from Oxford University, and an MBA from Harvard Business School.   Alan lives in Bridport, West Dorset, with his wife Linda, a keen gardener and complementary therapist, where they have transformed a rundown one-acre garden.